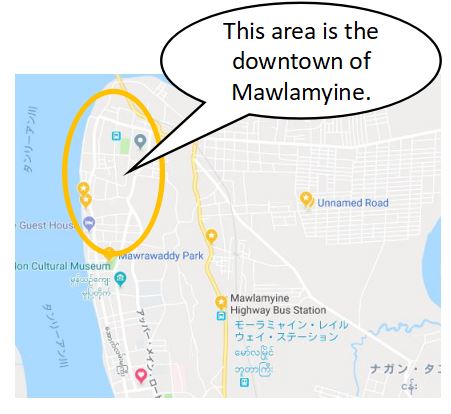 The upper left corner is Mawlamyine city, downtown. When making a reservation for a hotel, it is more convenient to reserve a hotel on the upper left as much as possible for sightseeing, dining and shopping in Mawlamyine city.
The hotel near the downtown is not cheap. There are also some cheap guest houses near downtown.

The highway bus terminal is located in the city of Mawlamyine, but it is a bit far from the downtown so you have to go to the hotel, hostel, guest house with a motorcycle or a car taxi (Tuk-tuk) etc.

Mawlamyine’s guest house, the hotel tends to be difficult to book on the internet. However, it is rare that guest houses and hotels will be fully occupied, so there is no problem, even if you come to Mawlamyine without reservation.
As the reason why you can not make a reservation, the Internet environment is bad, the guest house, the hotel side is not putting the emphasis, people who can use it, there are no people who can manage it is the main cause.
I am accepting by telephone correspondence, so I do not know whether there are staff who can speak English, but I recommend you to make a phone call and make a reservation.

※ The number of hotels and guesthouses that can be booked on the Internet has increased, so we recommend you search for the time being.

Things to do in Mawlamyine

There are also many people heading to Yangon after sightseeing Kyaiktiyo pagoda from Mawlamyine. Of course, the reverse is also possible. Traveling can be enjoyed more efficiently by going to Kyaiktiyo pagoda on the way.