We gathered places of information that far from Mawlamyine, taking a time more than an hour by car or bike. If you go to Kyaikkami Pagoda, Set Se Beach, it takes about 2.5 hours each way, so we recommend that you leave from Mawlamyine early in the morning. Kyaikkami Pagoda is along the sea, and we recommend that you should go. If you have time. Also, on the way back, you can also go back to see the Sleeping and Reclining Big Buddha and Sitting Big Buddha, and some pagodas.

Also, please be careful when driving in a rental motorbike. The driving of Myanmar people is very rough and it is dangerous to overtake by Myanmar driver. Please be careful when driving at night. Basically there is no street light, the road is dark, so many bugs fly towards the light. many insects hit clearly when it gets speedy, it hurts.
As much as possible, we recommend that you leave early in the morning and return home until Mawlamyine city or near Mawlamyine by evening.. I think that it is better to go to Kyaikkami first and go to some sightseeing spots by comingback to Mawlamyine.

In case of going by local bus, there is a bus to go to Kyaikkami Pagoda from Mawlamyine High Speed, Long Distance Bus Terminal, but it is difficult to get a bus ticket for foreingers and cannot get off in the middle. There are some good sightseeing spots along this street, so car taxi, biketaxi or rental motorbike is better.

This streaming is about 2 years ago when I rented a southern part of Mohramayain and went to the touring with a motorcycle rental. I hope you find it helpful.

How to use the map 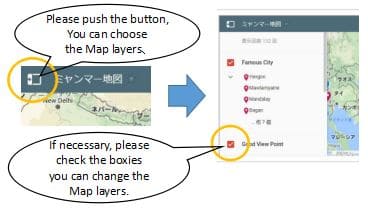